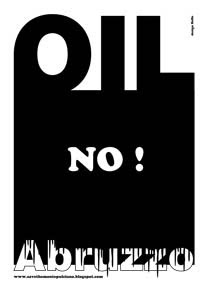 Anton Corbijn, Director of George Clooney's current film 'The American'that was recently shot in Abruzzo, has joined the environmental campaign 'No Oil Abruzzo' that is calling upon the Italian and Abruzzo governments to extend the moratorium on oil extraction in Abruzzo that runs out at the end of 2009 for another 30 years.

Proposed mining and refineries in Abruzzo will infringe on not just National Parks, Marine Reserves & Bird Sanctuaries but jeopardise those who make a sustainable living from both agriculture and tourism within the region.

A recent proposal by the Abruzzo government goes half-way in extending the moratorium but still allows for oil operations to be permitted in some onshore areas & just 5km off the Abruzzo Adriatic coastline, No Oil Abruzzo is calling for an inclusive moratorium that includes all off-shore drilling.

"I have just returned from 3 months filming George Clooney in Abruzzo. It is now my favourite region in Italy and that is not just because of the people there. One of the main characters in our new film is the landscape of Abruzzo: Castel del Monte, Castelvecchio, Calascio, Sulmona, Anversa and their surroundings had an amazing influence on the way we shot the film.

We choose these places because we love Abruzzo so much. To think that anyone in their right mind would for some lousy profit and product destroy a large part of this largely unspoilt paradise is beyond me.

For the pleasure of a few to take away the pleasures for many forever, is there nothing safe from greed and corruption (surely, how else is this possible?)? These few people should rethink their plans, their lives and the lives of others and put those oil drilling plans on hold for the foreseeable future."

The No Oil Abruzzo campaign believes that long-term clean investment in Abruzzo by commerce such as the film industry will benefit the whole of Abruzzo's population rather than a select few. As the area becomes more internationally known as an area of outstanding beauty more people will want to experience, either through the products it produces or by visiting locations that they see in films.

If oil mining commences in Abruzzo, no film location manager will want to film in a region whose beauty is worn out by oil mining. There will be no international demand to taste the fine food and wines it produces which have been tainted by the sulphur that is needed to process the low grade oil that the region of Abruzzo has beneath its soil & seas. Nobody will want to come and visit Abruzzo's mountains and Adriatic Sea when the vista is of oil mines, oil rigs and refineries. What will the people of Abruzzo do for an income then? What will be left of Europe's green heart?

The No Oil Campaign is supported by the WWF, The Catholic Church,
Wine-Growers Association, Assoturisimo, Confcommercio, The Union of Craftsman, Beach Operators as well as several local cultural, sport & environmental associations.

A handful of celebrities getting on the bandwagon to get themselves some free publicity seems to be the case here. Modern methods of oil extracting does no damage to the environment whatsoever. If those people want proof of how oil exploration can be carried out without any effect on the environment they need look no further that the oil companies exploring and producing in England onshore. They are so unobtrusive that most people do not know they exist and can be fully operational within a few hundred yards of a main road without any one even knowing they are there.
I think oil production in Italy would contribute vastly more funds to the national coffers and create more local employment that a handful of film makers turning up just because the flora and fauna of the region makes a suitable background for one of their multimillion dollar productions which lines their own pockets and contributes sod all to the region!

"Modern methods of oil extracting does no damage to the environment whatsoever."