Imagine the Outcry If they Made Tuscany into an Oilfield 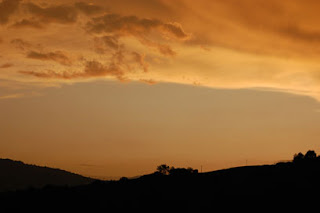 Can you imagine the outcry if the Italian government made Tuscany into an oil field? Yes it would never happen, but Abruzzo, slightly less well known but equally beautiful, is next on the list for the multinational oil companies and self-serving Italian politicians; Abruzzo is a wild and mountainous area of central Italy, famed for its national parks, vivid scenery and stunning wildlife.

49% of Abruzzo has been tagged ready for extraction pending final approval of permits, a colossal infringement of its biodiversity & ecological richness; oil wells in protected national parks, refineries in agricultural & wine land, plus rigs in the Adriatic Sea just a few kilometres from the coast.

No Buffer Zone for Coasts or Nature Reserves

The planned oil rigs will span the 100km that makes up the Abruzzo coastline. Italy currently has no environmental legislation limiting offshore drilling; compare this to California where no new oil rigs are permitted within a 100 mile buffer zone to protect its beaches and coast. Just 3 of the proposed oil rig sites are:

At 11 API, Abruzzo oil is only slightly better than the worst oil in the world - Alberta Tar Sands, which has an index of 8 API compared to rich Texas crude oil with an index of 40 API. In order to use Abruzzo’s heavy, sour oil with its high sulphuric content, polluting desulphurisation refineries will be required.

One refinery is planned in Ortona, set in the middle of vineyards from which award-winning Montepulciano d'Abruzzo wine is produced. 10km of pipeline are intended to link the oil field, refinery and port. The World Health Organisation recommends a legal limit of 0.005pmin, the emissions of H2S (Hydrogen Sulphide), a by-product of the refining of low grade oil; Italy allows up to 20ppm in refinery emissions, one can only imagine how the fallout of such high sulphuric emissions will impact the local viniculture and health of the community.

The People Say “No”

Abruzzo's sustainable economy is based on agriculture, winemaking and tourism, which the provinces of Chieti & Teramo have heavily invested in to help Abruzzo be the proud winner of 13 EU Blue Flag Awards. 80% of Abruzzo’s residents, 250 out of 300 communes, will be affected by the proposed oil excavation in the region; unsurprisingly the people of Abruzzo fear that oil is incompatible with both their way of life and current sustainable local economy.

In December 2008 a poll was conducted whose results showed that 75% of Abruzzo’s residents were opposed to drilling, 10% were in favour of it, and the rest did know enough to have an opinion about it.

Many of these opponents to drilling have read The FT, Corriere della Sera and Repubblica reports about Basilicata in Southern Italy, where in the last 15 years 70% of its territory has been covered by oil permits. Wine and olive production has declined by 50%, emigration and corruption is rampant, cancer rates have increased as water reservoirs have been polluted. ENI, the leader in the oil giants’ rush on Abruzzo, is facing litigation for the pollution of Viggiano.

Such strong opposition by the communes & residents of Abruzzo has seen the mobilisation of segments of society not normally associated with environmental affairs. The Catholic Church (the entire Abruzzo & Molise federation of bishops) has produced a document opposing drilling. Instead of hiding it under the carpet and hoping it disappears, the Assoturisimo (the association of tourist operators), Confcommercio (the association of commerce operators), Confederazione dell'artigianato e della piccola impresa (the association of small business and for arts and crafts) and The Association of Winegrowers have all been vocal in their protest of the drilling Abruzzo, all supported by the WWF, Legambiente & Greenpeace.

A Moratorium of 30 Years

People power can work; a temporary moratorium is in place but will expire on December 31st 2009. This was passed on March 4th 2008, when close to 6,000 people descended upon L’'Aquila Regional Parliament on the day it was being debated. Govenor Ottaviano del Turco, who later resigned on charges of a 6 million euro bribe, was in favour of drilling but due to public pressure signed the 2 year moratorium halting oil excavation in Abruzzo.

The people of Abruzzo are now calling upon the new Governor of Abruzzo, Gianni Chiodi and his deputy for the environment, Daniela Stati, to engage in public debates and to state their support for or against drilling; so far they have refused both missives as well as declining to speak to national media. We urge them to publically state their intentions for January 1st 2010. Abruzzo like Tuscany is not a place that should be ignored. 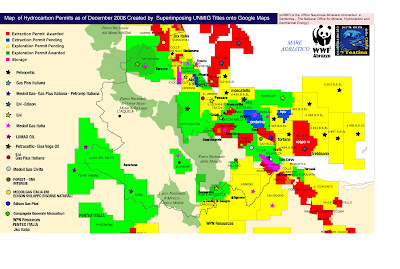