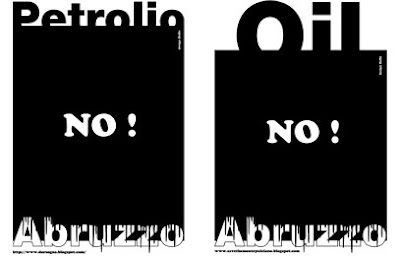 Wednesday 30th December will see the Abruzzo Regional Council debate the proposed amendments put forward by the ‘No Oil Abruzzo’ Consortium that includes the WWF and the Catholic Church, as well as local residents and communes opposed to drilling for oil in Abruzzo, which it is believed has everything to lose and nothing to gain for Italy’s green heartland.

Leaders of the consortium that included the Italian national WWF director today called for urgent measures to protect the region and the looming demands on its Adriatic Sea & Coastline. Proposals for oil platforms already received suggest drilling less than 5 km from the beach in some parts on the Chieti coast, and it is expected for these soon to follow up to the Teramo area.

The consortium for ‘No Oil Abruzzo’ issued a request for Abruzzo to emulate Emilia Romagna in curtailing oil exploration so that the area’s land, sea and air has a sustainable future where agriculture, tourism & fisheries, as well as the health of the people, will not be compromised in exchange for royalties. It expressed the urgent need to follow European Directives such as the Coastal Management Plan which curtails oil platform proliferation.
Posted by SammySan at 1:33 PM