From the American leader of the NoOilAbruzzo campaign to Rockhopper investors 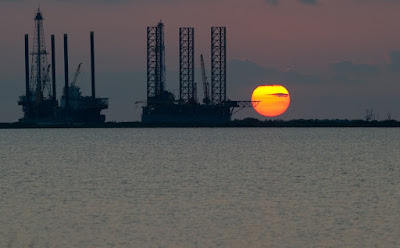 My name is Maria D'Orsogna, and some of you already know me, as in your posts you describe me with these words: "the leader of the NoOilAbruzzo campaign is an American living in California."

Indeed, I am a physicist and a professor of Mathematics and Biomathematics in Los Angeles. I lived in Abruzzo for ten years when I was young. Here is my story.

I see there is much interest on your part in making a quick buck out of Ombrina Mare. My answer to you: Not gonna happen.

We have been fighting this for years now, at least since 2008 and, the "delays" that Mediterranean Oil and Gas experienced, and that ultimately caused its demise, were largely due to our protests. Not sure Rockhopper Exploration will have a better fate in regards to Ombrina.

We are not a bunch of lunatics. We are simply citizens that do not want oil rigs and a desulfurizing unit to be built 4 miles from shore. And I am sure that if they came up with a proposal like that for wherever you guys go to the beach, you would not like it either.

Ombrina Mare and its FPSO will spit 200 tons of garbage in the atmosphere every single day, according to your own Environmental Statements.

Of course we don't like it, and you would not either.

There are a lot of us. Everyone in Abruzzo is opposed to this. From the Catholic church to rasta-haired youth groups, from the local tourist industry to coastal mayors, regardless of their political affiliation.

Sergio Morandi could come this far, just because of the corruption and disorganization that plagues Italy, but, as you can see, we were able to derail this project for at least eight years now. Ombrina was supposed to be operational in Q4 2008.

We are still here.

I am still here.

We have read, we have dissected every document that Sergio Morandi produced, and called him out to his own myths and propaganda on local TV stations and media.

I personally even wrote several articles about the evils of Ombrina Mare on the national press. You can read some of it here.

All those "facts" and "true or false" websites that Rockhopper is putting up are direct answers to the scientific, indisputable facts that I, an independent scientist, came up with.

People believed me and not the oil companies because I am not out there to make money off this and because the evidence is crystal clear. Sergio Morandi, and you people, on the other hand have vested interests, i.e. money. SO the best you can do is to present untenable arguments in favor of drilling.

Deep down you all know it is crazy, absolutely crazy to drill oil rigs and anchor an FPSO so close to a naturalistic sea line, but I guess guys for you money is stronger than ethics and commonsense.

Sergio Morandi did not take any of my activism nicely and thinks he can scare me away. Not going to happen either.

So, why do you insist on coming to our communities and destroying it? Is the prospect of money so alluring that you have let go of every tenet of human decency and want to force your presence in a place where you are unwanted?

Go drill your own beaches! Leave us alone.

What are you going to tell your kids, your families? That you made money by bullying a peaceful community? That you don't give a damn about climate change and that while the entire planet is talking about keeping fossil fuels in the ground, you have the gall to come to a foreign country and forcefully drill?

Aren't you people ashamed of yourselves?
What planet are you going to leave to future generations?

I have sacrificed eight years of my life fighting Ombrina, and ENI before them, but there is some pride in having taken on oil giants and in having tried to do the right thing, despite how hard it was to balance it all.

And I did it for love. We sent ENI packing. We sent Forest Oil Corporation packing.

To me, you are the face of what greed does to people.

It is interesting that none of you even have the courage to come out with your real name.  Maybe you are a bit embarrassed after all.

I am not sure how long this will last, and I don't know who will prevail at the end. Maybe indeed, your lack of respect will allow you to able to drill. I don't know.

But this I will tell you: we won't give up until the very end, and if it does turn out that Mediterranean Oil and Gas, or Rockhopper Exploration or whatever your name is, will eventually be able to drill our beautiful Abruzzo, it is just because, in my opinion, you were bullies to us, shameless bullies of the worst kind.

To your lawyers that so hate me: this post was written in Los Angeles, California. Freedom of speech is protected by the First Amendment of the Constitution of the United States of America.

Mr Morandi, still waiting for you to abide by court rulings.