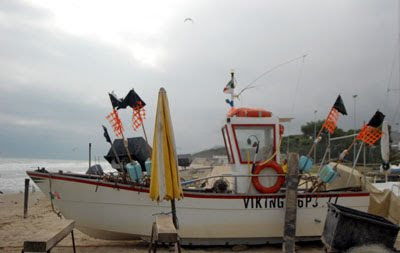 The fight to stop Abruzzo being trampled by the greedy squabble for its low grade oil continues. Yet another application has been received to drill the very traditions and wildlife out of this beautiful region of central Italy, an appreciation shared by George Clooney (who has just finished filming there) and film directors Anton Corbijin and Luc Jacquet.

This new application has been submitted by the English oil giant MOG (Mediterranean Oil & Gas Co Ltd), who wish to set up an oil rig 6km opposite the Marina di San Vito that sits in the very heart of the trabocchi coastline, and slap-bang in the middle of a fish reserve. This will bring death to both fish and fishermen whose livelihoods will be ruined and who most certainly will not be employed in this enterprise if it is approved.

To understand how this will cause the local marine reserve to falter & die, one first needs to understand the stages of life of an oil platform; each stage shares a common method of dumping toxic drill cuttings and chemicals back into the sea which poisons the very life therein. All have a lethal affect on fish, birds, molluscs, and mammals like dolphins and humans that eat them. This includes cancer, stunted growth, irregular growth of feathers, scales & skin, respiratory system & liver problems in addition to irregular reproductive behaviour.

Underwater explosions of around 250 decibels (the human pain threshold is at 140 db) are created by air guns to deduce underlying geology that is measured by the reflected sound waves. This has a particularly disturbing effect on dolphins which use sound for communication & navigation. Fish are also displaced, which in turn affects the dolphins and birds which feed on them. Studies have shown that the numbers in fish stock is reduced by 45% within 9.5 km of these blasts. The blasts can damage tissue, including lungs, guts and ears in mammals, and swim bladders in fish.

At this point, "muds" (lubricants) are pumped down, to keep the drill bit cool and to regulate the flow of oil. They consist of hydrocarbons, heavy metals (including cadmium, mercury and lead) and other toxic chemicals, as well as chemicals that stop rusting, and detergents. The drill cuttings (the removed rock) is dumped onto the seabed and the cuttings asphyxiate the life of the seabed, severely impacting the structure of the ecological communities up to several kms around.

The installation of the platform & pipeline causes further disturbance to seabed ecosystems, through dredging, filling and anchoring. Underwater structures are treated with protective chemicals, which release toxins into the water. The oil platform discharges not just the water it needs to keep it cool, but sewage, constant noise and light pollution.

Most fields contain water as well as oil and gas. This "production water", containing both oil and chemicals, receives only very simple treatment before being discharged. The discharges of production chemicals is estimated at 6,000 tonnes per year (30% of quantity used), plus 84,000 tonnes of drilling chemicals.

Despite Italy signing up to the EU Directive ‘Marine Works (Environmental Impact Assessment) Regulations 2007’, it appears that scant attention is being paid to this act either by MOG Ltd or by any Italian Ministry accepting this application. We urge anyone who wishes Abruzzo to retain its diverse and healthy wildlife to write to these 2 ministeries to petition against this application, here is an example letter for those that need guidance,you will need to change your name and address, the ministery address and the application reference to the MOG reference below. Time is short, please act now as the deadline for petitioning this application is January 25th 2010.

Further Reading
To read the application form that MOG has submitted click here
Posted by SammySan at 10:13 AM