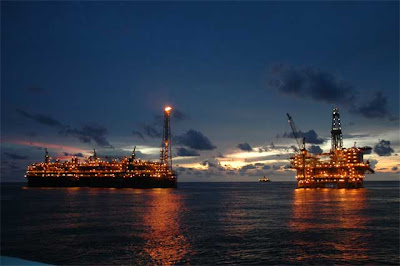 Oil rig and FPSO. MOG wanted to build these beautiful objects 3.5 miles from the Abruzzo coast. Shame on you!


This is hilarious - the people at Mediterranean Oil and Gas can't do simple math!

Back in June 2010, the Italian government passed a law, according to which ALL and ANY oil rig planned within 5 miles from shore, all around Italy, will not be allowed. The ban increases to 12 miles, in the proximity of Coastal or Marine parks.

MOG wants to drill their Ombrina Mare rig off the coast of Abruzzo, complete with an FPSO, an oil processing and storage ship, about 5 kilometers from shore with a mini-desulfurization facility on top of it. The area is close to the Parco Nazionale della costa Teatina and well within the 12 and 5 mile border designated by the law.

The law was passed in the aftermath of the Gulf of Mexico disaster, but also thanks to Italians protesting their government to better protect our waters.

Despite all this, MOG doesn't seem to understand and keeps thinking they can still get away with it. Maybe I have to tell them:

Dear sirs at MOG: 5 miles = 8 kilometers, and that is larger than the 5 kilometers of your oil rigs!
It is crystal clear.

What part of YOUR DRILLING IS ILLEGAL do you not understand?
The people of Abruzzo have spoken, protested and forced their politicians to say no. To this day noone supports the drilling of Ombrina Mare, except those who have vested interests in its construction.

So what business does MOG have, a British company, to still push their agenda?

GIVE IT UP - WE DON'T WANT YOU HERE!
COUNT YOUR LOSSES AND GO SOMEWHERE ELSE!
I know what their problem is, they are about to go bankrupt!

Today an article by Andre Lamberti, in Proactive Investors UK states that MOG is considering a "sale of the company" or the "divestment of certain assets", as suggested by their CIBC consultants, who obviously have no knowledge of Abruzzo, nor do they care.

To them, it is just about money, assets, speculation, drilling, a far away land on a map. To us, it is the beach we go to in the summertime, where the memories of our youth are and that we want to give to the next generation - oil rig free - thank you very much.

According to the same article, the ban has "materially impaired" MOG's ability to raise further funds required to develop its assets, as well as to meet working capital requirements.

They also are asking their loan repayments to be extended past the deadline of September 2011.

In other words: we are driving them bankrupt! They thought they could come here and do as they pleased? You obviously do not know who you are dealing with, sirs!

“Negotiations with potential investors are on-going and the company is hopeful that one of the current opportunities will resolve the company's financial position satisfactorily. There can be no certainty that these discussions will result in a satisfactory outcome".

They know it too that they cannot win.

Yeah right - who do you think you are kidding - you are penniless!