The ban is official 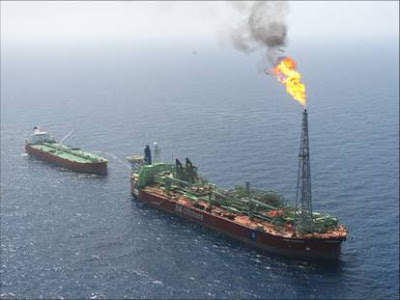 An FPSO unit similiar to the one oilmen want to build along the Abruzzo coast.
Go drill Ireland!

The ban is official!
Starting from today it is illegal in Italy to drill any of your unwanted oil rigs within 5 miles from shore anywhere along the coast, and within 12 miles close to Natural marine reserves.

AS OF TODAY ELSA2 AND OMBRINA MARE ARE OUTLAWED.
Today, August 26th 2010, the law presented by the Minister for the Environment, Stefania Prestigiacomo, comes into effect. The law was proposed after the Gulf of Mexico oil spill and because of huge negative popular sentiment against offshore drilling all over the country. Our efforts to stop you and save Abruzzo have played no small part in this effort. The battle is not over and we will keep hounding you until you go back where you came from and where you belong. We will not let you play games with us.

Your ill-conceived plans of drilling us at 2 or 3 miles from shore are history.

Your plans of placing a fire-spitting processing unit - a permanent ship meant to desulfurize sour crude oil, complete of incineration unit that alone would have spewed 800 tons of petroleum waste a day - are history.

Just gracefully give it up and leave us alone.
We don't want you here.
Posted by maria rita at 7:25 AM

Well done, it's a victory of Italy and Italians (at last!)