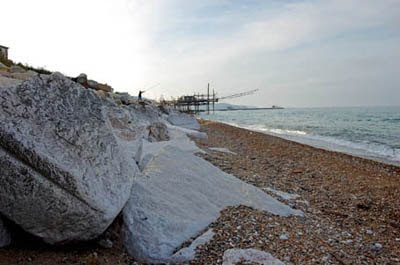 Today the BBC’s World Service revealed that 20,000 gallons of crude oil is trapped in Alaska’s gravel beaches from the Exxon Valedez Oil disaster and is impacting the local eco-system, sea otters, sea ducks and other sea birds, all of whom are producing an enzyme that indicates exposure to oil. The original belief was that the leaked oil would bio-degrade hence clean-up operations had been disbanded in 1992.

Professor Michael Boufadel, chairman of the Department of Civil & Environmental Engineering at Temple University, has found there is a susceptibility of beaches worldwide to long-term oil contamination where beaches tend to be gravel or a mixture of sand and gravel. What happens is that the gravel traps the oil between two layers of rock, with larger rocks on top and finer gravel underneath.

The beaches in Abruzzo are mostly soft & sandy, though there are many stony gravel ones, particularly in the Chieti region. Accidents in oil extraction from equipment failure, human error, and natural impacts, i.e. earthquakes, are not just a possibility but highly probable. The chances of accident are increased not just by the proposed oil rigs that major oil companies have applied to construct, but from oil traffic, i.e. oil tankers that would be visiting the proposed refinery in Ortona to take Abruzzo’s low grade oil to distant shores.

Abruzzo’s growing popularity as a holiday destination saw the region this weekend featured by leading UK press: The Times, who named it within its Top 10 ‘Adventure Holidays of a Lifetime’, and within The Guardian who did a feature on Abruzzo Ski-ing, and this is just for its lesser known ‘winter sports’. Tourism benefits all trades within Abruzzo not just the farmers & winegrowers who supply the restaurants, but the chefs that are employed, the marketing companies who promote the area, the printers who create marketing materials, small construction & building companies who build hotels and villas for tourists to stay, to name just a few of those and the ancillaries thereof who benefit. None of these people will be employed by oil companies nor will they have a job if there is an oil spill on Abruzzo’s Adriatic coastline.

Boufadel's study was funded by a $1.2 million, three-year grant from the Exxon Valdez Oil Spill Trustee Council. The council was formed after the environmental disaster to oversee restoration of the sound. Does the Abruzzo Government think it will be in a position of power to request such monies from any of the oil companies involved in future oil exploration in Abruzzo? Does it have funds available to pay for future unemployment that will occur if disaster strikes?

Listen to the BBC Programme, Science in Action that revealed Professor Michael Boufadel's research or read here the findings of his study on long-term oil contamination.

Trabocchi Photograph © 2010 Life in Abruzzo
Posted by SammySan at 4:51 AM

I am really sad that Abruzzo encounters such problems now.